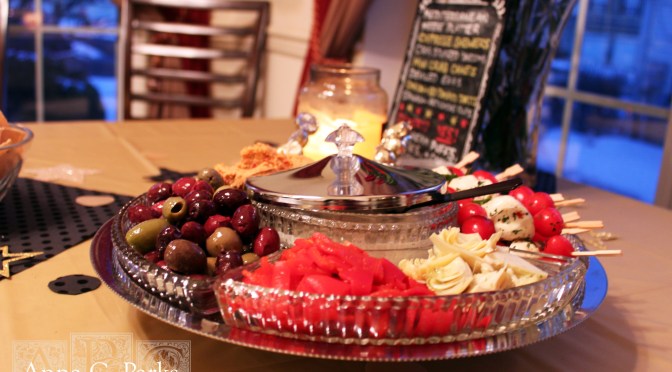 The Oscars party went off without a hitch! I think everyone really enjoyed themselves, especially the food and drink, since there was definitely not much to pack away by the time the party was over and the guests were all gone by 12:30 am. The menu contained a nice mix of homemade and store-bought stuff to make things easy. I prepped a lot of the homemade items in advance for quick and effective cooking or set-up by the time the guests came for the party.

Without further ado, though, here’s the menu…

After all of the tarts, mushrooms, crab cakes, and other hot appetizers were assembled the morning of the party, I put them on baking trays, covered the tops with (very) lightly dampened paper towels, and wrapped the trays in plastic wrap. These were stored in our spare fridge until it was time to get ready for the party. Fortunately, we have a full-size spare fridge, so I was able to fit 5-6 standard-sized baking trays in there with little effort, as well as some of the other party stuff. So nice to have an extra fridge!

As for the actual awards ceremony, Birdman and The Grand Budapest Hotel basically swept most of the categories in which they were nominated. I have my opinions about Birdman, which I’ll be sharing later in the week, but it is undeniable that there was some fierce competition this year in all categories. Lady Gaga’s performance was interesting, definitely showing a different side of her that builds upon her recent work with Tony Bennett to re-record the classics. Other than that, I kind of felt indifferent about the rest of the show, which seemed to drag on and on until it came time to give out the exciting awards (e.g., Best Leading Actor, Leading Actress, and Picture), but it still might be fun to make this party an annual tradition.