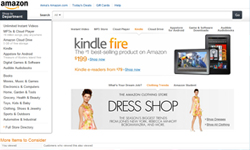 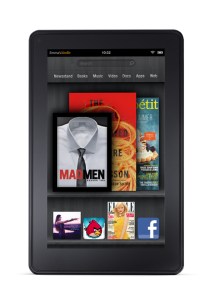 After going back and forth for quite some time between wanting a laptop and a tablet, my mom treated herself to a Kindle Fire for Mother’s Day and her birthday, complete with a matching stylus and case.

The Kindle Fire directly competes with the Nook Tablet at a $199 price point with many of the same features. The 7″ screen has bright, crisp colors, even with the backlight turned down, at a resolution of 1024 x 600 (169 ppi). The device feels well-built, not thin or cheap looking like I think the black and white e-Ink Nook and Kindle devices are. One of the biggest points that the company has marketed has been its similar size and shape to a paperback novel, and it is very convenient to pick up and carry around.

The interface operates on a customized version of Android 2.3 Gingerbread with its own Amazon Silk web browser. All of the categories (Newsstand, Books, Music, Videos, Docs, Apps, and Web) are clearly marked on the top of the home screen for easy access. When you tap a category, you are taken to the appropriate document library. Icons in the top center, appropriately named Cloud and Device, allow you to choose between items saved in the cloud or on the device; below that is the option to sort the items in that category; and on the right is the icon to access the store. If you want to go back to the Home screen, there isn’t a physical button to click like there is on the Nook Tablet or iPad. Instead, a navigational bar pops up at the bottom whenever you leave the home screen and it has icons to go home, go back, search, and change view (grid or list).

Buttons and ports on the outer frame are minimal: a small, circular on/off button that also can put the device to sleep when you press it once; a rectangular shaped button to control sound up or down; a micro-USB port for charging (which is nice, unlike the Nook Color or Tablet, which has a customized micro-USB charger and doesn’t allow for a regular micro-USB to be used) and a headphone jack. Like the iPad, the Kindle Fire does not have expandable memory.

When purchasing books and other media, I like the fact that you never have to login to your Amazon account; it’s a pain in the ass to have to constantly enter a password when downloading something from the Apple iTunes store, and there is no way to disable that. Admittedly, I have not downloaded a lot of things on here yet, so performance is hard for me to judge at this point in time.

What’s next from Amazon for the Kindle Fire? Recently, it was the first Android tablet to support HBO Go, an app that allows existing HBO customers to watch previous episodes of HBO shows like Game of Thrones and True Blood. Rumor also has it that Amazon might be releasing a smartphone. I wonder what success they would have with that, since they’d be a latecomer in the already booming Android smartphone market.