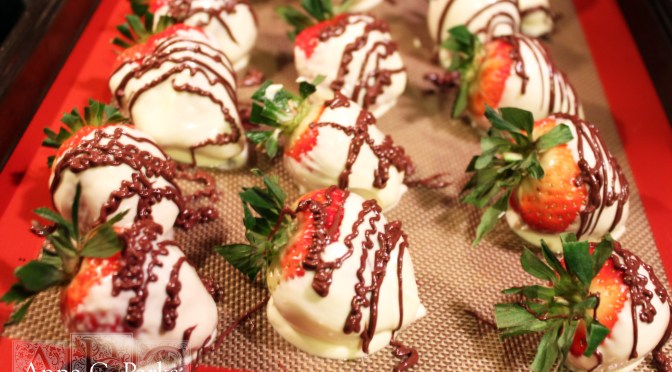 I hope everyone had a great Valentine’s Day Weekend! Also known as the day of year that is obligatory with chocolate, frilly pink and red decorations, flowers, and — of course — love. My day was more like snowy and cold rather than frilly and pink, since we continue to get more snow and below-freezing temperatures here in the Northeast (thankful not to be in Boston, though, where they have upwards of six feet of snow right now!), but it was certainly filled with the latter few things, including lovely flowers and other surprises from Steve that greeted me when I woke up on V-Day morning.

There was some cooking this weekend. And by some, I of course mean quite a bit. I managed to knock off a few things on my foodie to-do list as well as tested a few potential recipes to make for my Oscars party.

Chocolate covered strawberries were, of course, a necessity for the holiday and the first order of business on Friday night before we even ate dinner (LOL). I am not going to bother writing a formal recipe for this since it is so easy, there is practically nothing to describe in detail. Steve and I melted white chocolate chips in a glass bowl suspended over a saucepan of simmering water on the stove, stirring occasionally until the chocolate was mostly melted. We dipped the berries to coat and immediately placed them on a baking tray covered with a silicone baking mat. If you don’t have a silicone mat, parchment paper would work equally as well, although the silicone mat is reusable. (Seriously, get one.) 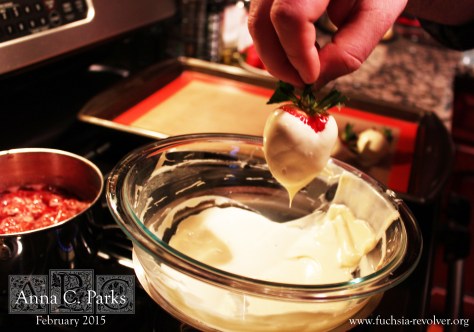 Then we melted the 60% dark chocolate chips in the same way and put it, once cooled slightly, in a pastry bag. I was out of real pastry bags and nobody felt like folding one out of a parchment triangle, but using a clean plastic storage bag with the corner snipped off worked fine for this purpose. We drizzled the contrasting chocolate over the strawberries until they were covered, liberally. The berries were perfectly chilled after sitting overnight, which allowed the chocolate to completely harden in the refrigerator. 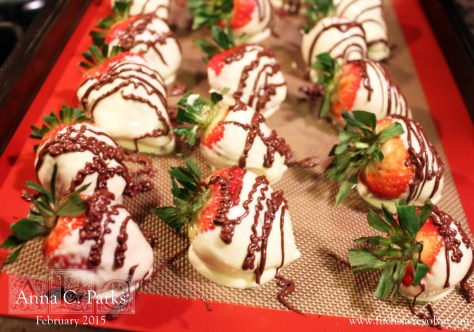 I also made a berry coulis using fresh strawberries cooked in a little water, Chambord, and sugar. 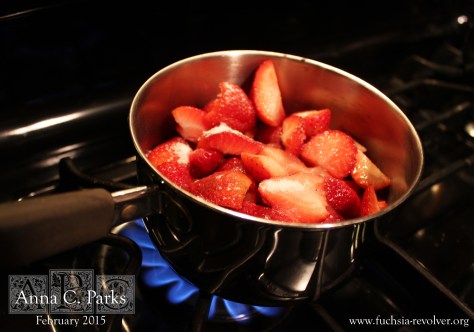 When the berries were soft, I added a few tablespoons of my homemade blackberry-blueberry jelly, canned a few months ago, which really thickened the sauce because of the pectin. It turned a really lovely color (not unlike the color of the mauves and purples used in this layout, I see… LOL) when it was blended with an immersion blender and strained to remove the seeds.

I love this little strainer, which I use often when juicing lemons, making cocktails, and dusting things with powdered sugar or cocoa. It fit perfectly on top of the mason jar. 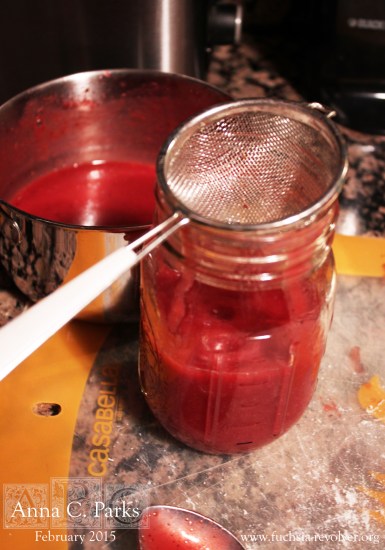 I forgot to add a little lemon juice, which would have made the flavors pop, but oh well. Next time.

For dinner, we had a recipe that I got in my Blue Apron box last week — a boullabase made with cod, fennel, and tomatoes and served with crusty garlic toasts for dipping. While we were cooking, I made ridiculously simple caprese skewers to snack on, an idea that I wanted to try out for the Oscars party next weekend.

These were ridiculously simple to make, involving all store-bought ingredients and minimal assembly. Thread bocconcini (small mozzarella balls) and grape or cherry tomatoes on a skewer and serve with creamy pesto for dipping. Done! 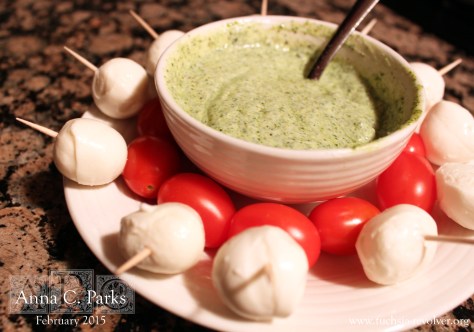 They were tasty, but they would be better made with some locally-grown tomatoes, since these were imported from god-knows-where. That will have to wait until summertime comes along, though. The sauce could also use some tweaking, which I made by simply combining pesto with sour cream and some salt and pepper, but as a concept I thought it worked well. Next time, I might try a different pesto (I generally make my own but didn’t have the time or any frozen in order to do this) and subbing Greek yogurt or a little mayo and adding extra Parmesan and basil to the sauce to amp the flavor.

To drink, I tried out several variations of the Scofflaw, one of the cocktails that was on the Liquor.com list of bourbon cocktails that I wanted to make for the longest time. 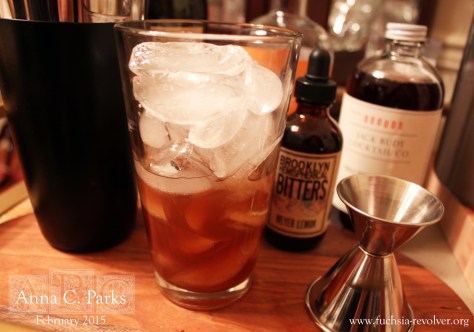 First, I followed the recipe with the ratios as written. I used bottled organic lemon juice (I KNOW… fresh is best and the food police are going to come flog me now that I openly admitted to doing this), Jack Rudy grenadine (good stuff; knew about the brand for some time and finally found it at Crate and Barrel a few weeks ago), Wigle small-batch rye made in Pittsburgh (they make an all-organic version that I would love to try but this one, as the name would imply, is distributed via the P.A. state liquor stores), Brooklyn Hemispherical Bitters Meyer Lemon bitters (I use these in nearly everything now — love them) instead of the orange bitters, and a good-quality sweet vermouth (cool bottle, but I forgot the brand) for the dry vermouth since it was what I had available. 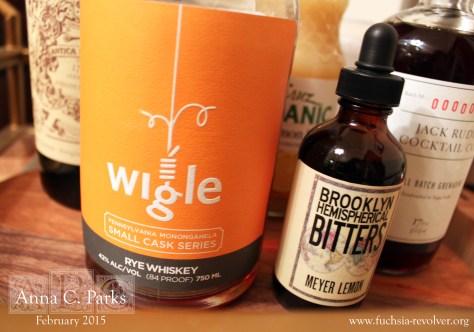 I don’t have a complete set of coupe cocktail glasses, so I served it in a Old Fashioned glass. It was good with a nice, citrusy aroma and I picked up on a little smokey note from the rye when I tasted it. I typically like ice in my drinks, though, whether called for or not, so I tried again. 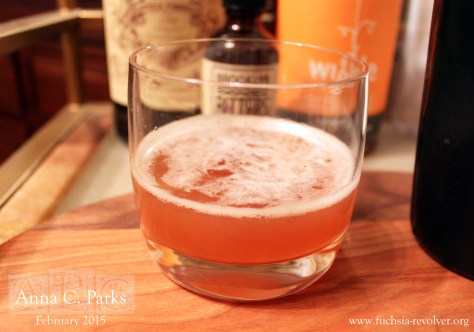 The second time around, I shook the cocktail with ice until it was frothy and then served it over crushed ice. A big improvement, in my opinion, in the mouth-feel of the cocktail when made with the ice, which surprisingly didn’t dilute the drink too much as it sat. A nice layer of foam was retained when it was poured over the ice, too; the cocktail kind of looked like The Black Demure at that point. I did lose some of the aromatic qualities, though, but for me the fact that it tasted more refreshing overall made up for that. 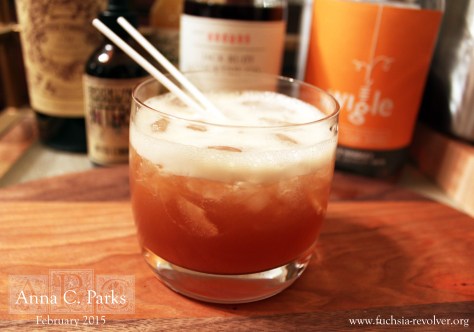 I tried a few other things after that which involved experimenting the ratios to see if I liked more sour or more sweet, just to see what would happen. The second preparation was definitely my favorite out of all of them, though.

All of this was just leading up to the main event: Valentine’s Day dinner on Saturday night. Sadly, I didn’t take any good-quality pictures, but I can certainly share the menu and promise to take some the next time!

Old Fashioned Cocktails — another one from the Liquor.com list of bourbon cocktails. I followed the recipe pretty much to a “T”, except for using Makers Mark, my eternal bourbon of choice, and topping the drinks with lemon-mint instead of regular-flavored club soda or seltzer. Not bad, although Steve and I each had one before I switched back to the Safflaw and Steve switched to beer.

Smoked Salmon Canapes — I always think of canapes as sounded dated, fussy party food, but my preparation was definitely not fussy. Instead, I made a DIY canape station, since I wasn’t about to mess around with making a ton of individually-sized snacks for four people. I set out a bowl of herbed cream cheese that I made by blending whipped chive cream cheese with fresh parsley, dill, heavy cream, and fresh black pepper in a mini food processor. Spread on bagel chips and topped with fresh dill, smoked salmon, and fried capers (not something that I would try doing again…), it was a perfect little bite. And yeah, gonna need to make it again sometime soon because it was outstanding.

Shrimp Scampi — instead of linguine or angel hair, I thought long, tube-shaped bucatini pasta would be a good choice to serve with the garlicky white wine-covered shrimp. I also topped the whole thing with toasted breadcrumbs and Parmesan cheese, which gave it a little crunch.

Mousse Parfaits — OK! This was a real saga, so I saved this story for last. My original idea here was to make a classic chocolate mousse flavored with a liqueur of some kind, but this morphed into an idea to switch it up a little bit and make white chocolate mousse. Then I thought, why stop there? because dark chocolate and white chocolate mousse piped together would be best of both worlds. Not being able to leave well enough alone, I ended up with something mousse-like and white and dark chocolate, but it was in the form of a layered mousse parfait by the time I was done riffing on the concept.

The base layer was an orange-flavored chocolate ganache made with 60% chocolate. I lightened the ganache with stiffly-whipped egg whites, forming a chocolate mousse consistency that went on as the second layer. Berry coulis came next. Finally, white chocolate mousse, which gave me some serious hell when the chocolate burnt or seized up not once, but twice, ruining both batches. The third time was acceptable enough to be the final layer, to which I also added some orange liqueur and vanilla bean paste. The whole thing chilled for quite a few hours before it was served, topped with whipped cream and crushed super-thin European almond cookies (these were awesome; forgot the brand but I got them in the cookie aisle at Wegmans.)

Drama with the white chocolate and less-than-stellar execution aside, the end product was really tasty and had great textures. A lightly-flavored, airy mousse layer, sinking into berry and intense chocolate layers, with a crunch from the cookies. This would be amazing in cake form, layered with sponge cake. Maybe individual cakes made with a ring mold. Hmm… seriously going to have to keep that in mind.

As an aside, I blame the documentary that Steve and I watched on Netflix the other night for this dessert insanity. It was called the Kings of Pastry and it was about a group of 16 pastry chefs competing in the Meilleurs Ouvriers de France (M.O.F.) competition, which occurs once every four years and is a tremendous honor given by the French Ministry of Labour to craftsman who successfully complete the competitive events. The M.O.F. extends to different trades, but this one was pastry-specific and involved insane chocolate sculpting, sugar pulling, plated desserts, and individual pastry and chocolate preparations. It was phenomenal, a true inspiration to never stop thinking and trying creative things, even if they featured things that I could only dream of ever being able to try.

So, now that I have made everyone thoroughly hungry — and I know that it is lunch time here where I am — how was your Valentine’s Day? What did you make or do?